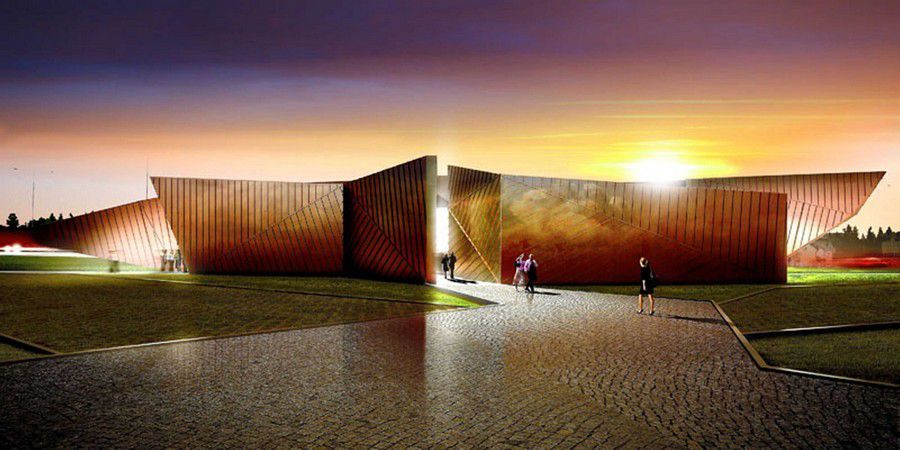 The historic town of Zory in Poland has an interesting relationship with fire – its name is associated with the Polish words for flames and burning (after an older settlement and forest on the site was cleared in this way) and the city has suffered the devastating effects of numerous conflagrations over the centuries. Thus when the town’s development and tourism body “Nowe Miasto Sp. z o.o.” decided to create a new cultural and educational facility, the concept for a pavilion inspired by fire took hold, and OVO Grabczewscy Architects from Katowice were commissioned to realise this idea.

Naturally the construction of a new public building demanded the highest standards of both safety and sustainability  and as part of the more traditional specifications of reinforced concrete and steel, the flame-retardant advanced breather membrane DuPont™ Tyvek® FireCurb® was installed behind the structure’s gleaming, flame-like copper façade.

The strikingly angular building has levels both below and above ground: the lower level houses an interactive exhibition facility covering an area of ​​394 square metres, while at ground level there is a range of conferencing, seminar and theatre facilities over an area of 250 square meters.

Oskar Grabczewski of OVO Grabczewscy Architects comments on the plan: "This project seemed almost perfect initially – a great location situated prominently on the main road into town and no restrictions to either form or function. In other words - complete design freedom. Construction, however, proved to be much more challenging than originally hoped as the location concealed some unpleasant surprises. Sewage systems, storm water drains and a gas pipeline intersected the area.”

“In addition,” Oskar explains, “geotechnical studies revealed that there had once been a garbage dump on the site, which in effect disqualified the land for new building. However, after considering all options, including various configurations for the foundations, the decision was made to fully excavate the available ground directly under the planned building."

On the plus side, the required excavation resulted in an increased potential volume for the project, at which point the investors and developers, Nowe Miasto, decided to create the ‘Museum of Fire’ exhibit in the basement – a multimedia space dedicated to both the city of Zory, and this fascinating element in all its aspects.

Inspired by this concept (and influenced by the angular restrictions of the footprint), the shape of the building became a creative interpretation of fire – a copper-clad structure reminiscent of leaping flames. The load-bearing walls are built from reinforced concrete, the ceilings are fitted with thermal acoustic panels, and the roof sections are supported by reinforced steel joists. The exterior copper facade benefits from a special new coating (supplied with a 10-year warranty) which will protect against the normal patination one would expect with the metal, and so its gleaming relationship with the light looks set to last

The issue of meeting local and EU fire regulations (clearly, both a legal and thematic imperative!) were solved with the consultation of fire safety experts. Thus a waterproof plywood panel system was coated with a flame retardant lacquer and then fitted with 1250 square metres of the pioneering flame-retardant breather membrane, DuPont™ Tyvek® FireCurb®. For an institution dedicated to educating the public about fire, while also exploring new technologies for fire safety, it is particularly fitting that such an innovative product has

Rather than use halogens, the technology to produce DuPont™ Tyvek® FireCurb® employs a phosphorous-based agent that forms a ‘char’ layer at the surface when it is in contact with an ignition source. This thin layer of carbonized polymer is highly flame retardant and forms a barrier, slowing the release of flammable materials. Starved of fuel, the flame spreads over the membrane more slowly or not at all – and if the membrane does ultimately catch fire, it produces less smoke. Rigorously tested, DuPont™ Tyvek® FireCurb® Housewrap has a fire rating of class B-s1,d0 according to EN13501-1.

The design of the building posed considerable challenges, its irregular shape and lack of right angles in particular. The interior therefore features many custom made solutions, including broken stretch ceilings, a solid copper reception desk and a geometrically articulated main staircase. The biggest challenge, however, was the installation of the buildings’ crowning feature, the shining copper façade – behind which DuPont™ Tyvek® FireCurb® is set to perform and protect for the long term, something upon which the team of architects, developers, contractors and the city of Zory itself can confidently rely.