Tyvek® Membranes Perform And Protect Even In The Harshest Climatic Conditions 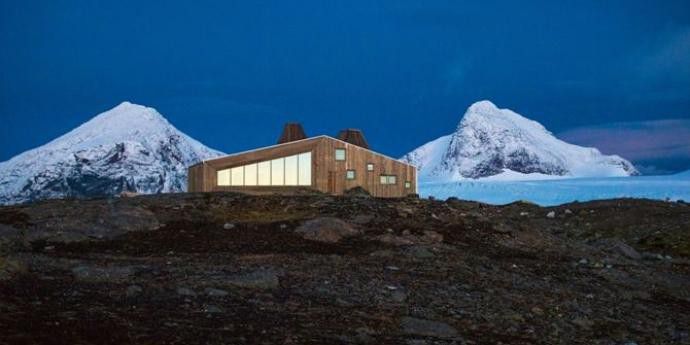 DuPont™ Tyvek® breather membranes for buildings have been specified for the remote new ‘Rabothytta’ trekker’s cabin near the Okstind Glacier in Norway, designed by Jarmund/Vigsnæs Architects. Photo courtesy of Hemnes Turistforening, all rights reserved.

The breathtaking beauty of Norway’s far north now has a first-rate new facility to welcome adventurers to the magnificent Okstind glacier. Commissioned by the Norwegian Trekking Association (DNT) and designed by Jarmund/Vigsnæs Architects (www.jva.no), the remote ‘Rabothytta’ cabin has been built to precise specifications to withstand the harsh extremes of weather in the region. Designed to echo the natural forms of its landscape, it is part of a network of self-contained cabins and can accommodate groups of up to thirty people on a self-catering basis.

Serving as a ‘base camp’ for high-mountain expeditions, the structure demanded robust solutions to protect against fierce winds, rain, snow and ice and to optimise thermal performance and interior comfort.  Two different types of DuPont™ Tyvek® advanced breather membranes have been used in the construction to ensure a wind-tight envelope that is protected against moisture while allowing vapour to diffuse.

Spruce also clads the interior walls and forms the cabin floor, while DuPont™ Tyvek® Soft seals the interstitial envelope, protecting the hut both during and after the construction process. The large ‘viewing’ windows are made from two layers of glass with a further layer of 13mm toughened glass to the exterior, supplied by local manufacturer Trenor AS.

The pitched roof structure features Kerto timber rafters with insulation, wrapped in DuPont™ Tyvek® as an airtight wind and moisture barrier – a crucial element to guard the build until completion and to enhance interior comfort once occupied. Further protection is provided by Isola Isokraft, an extremely tough asphalt membrane covered with a finish of Kebony timber planks.

Situated at 66 degrees north, 1200 metres above sea level and 60km south of the Arctic Circle, the cabin benefits from all the natural beauty of its surroundings yet is sheltered from its exposed location by the best that modern building technology can offer. Designed for maximum efficiency, its energy is supplied via a wood-burning heating system with electricity from a combination of solar panels, a battery bank and mains supply where necessary. Wind turbines will come online once budget allows.

Svein Arne Brygfeld of the Norwegian Trekking Association (www.turistforeningen.no) says, “Robothytta is the missing link in a chain of trails and huts in this important area for outdoor, scientific and educational expeditions. It offers both a goal and a starting point for incredible experiences in these mountains. Only an organisation such as ours would be permitted to build in such an extraordinary location – and out of respect for the opportunity we chose one of the leading architectural practices in Norway, Jarmund/Vigsnæs Architects, to realise our very specific requirements.”


In terms of the striking pitched and angular design of the hut, Svein comments, “The structure was conceived both to withstand the elements and to dynamically interact with its environment. It is designed to resemble a large and ancient rock within the landscape, at ease with and yet involved with its surroundings. Wind will work heavily on the structure and during the winter much snow will move around the cabin. We wanted to create an exterior form that could resist a heavy build-up of snow and at the same time, we wanted visitors to fully experience the magical scenery from the comfort of the interior.”

Svein explains that, based on a limited footprint, the functional design of the cabin is necessarily compact, but with very thick insulation on all sides. The construction enables scalable use of energy so that a smaller group can heat only a limited part of the cabin – crucial when consumables such as cooking gas and wood etc., have to be helicoptered in! The structure’s ability to cope with wind pressure is critical due to its proximity to a large glacier on one side and steep mountains on the other, with wind speeds of more than 200 km per hour not unusual.

“The membranes,” Svein says, “play a vital role in managing these conditions, so DuPont™ Tyvek® was fundamental to the design. Furthermore, when the hut is not in use the interior temperature may be lower than the exterior, thus moisture protection is even more important than in a climate regulated building.”

“Rabothytta” will be opened officially in August 2014, but Svein reports that interest is already extremely encouraging, both in Norway and abroad, and he believes that the new shelter will be among the most popular in country.