Doubling of a railway line in Luxembourg 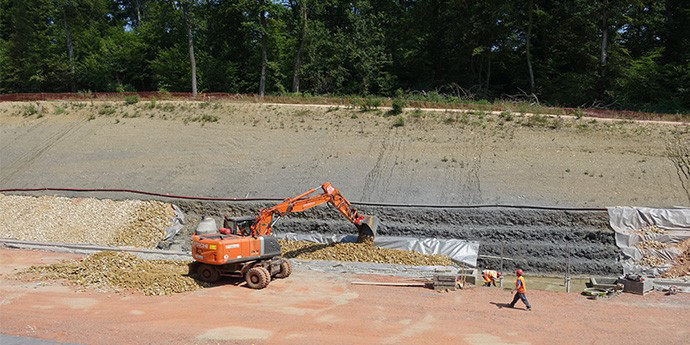 This construction project consists of doubling the width of the existing single railway track between Luxembourg and Sandweiler-Contern which allows for an increased capacity of the railway traffic and an increased train speed (from 40 to 100 km/h).

The aim of the project is to reduce the volume of vehicular traffic on this portion nearby road system particularly congested during rush-hour. It is a colossal building site: 6.6km long with 180 000m3 of  excavated rock as the line runs across rock trenches in some places.

DuPontTM Typar® is the geotextile that has been used throughout the entire project, for all the subgrades (Typar® SF 77 260g/m2) as well as the drainage areas (Typar® SF 40, 136g/m2).

DuPontTM Typar® was chosen by Baatz notably because its technology. Thermally bonded non-woven geotextiles offer a much higher resistance before failure and combined with its higher energy absorbtion caperbilities, delivers a much better solution than competing products. For instance, with a 1.15 kN  resistance to punching, DuPontTM Typar® has an area density of 260g/m2 while a competing product area density is 300g/m2. Typar® also offers considerable benefits in terms of on-site logistics, handling & ease of installation for a construction project of this scale.

Equally, the availability of Typar® rolls in a great variety of sizes was another handling asset for this building site, where the existing railway was embedded in the rock.

This versatility in roll size enabled Baatz to adapt the choice of roll widths used to the accessibility of each area. Larger widths and lengths (up to 100m) were used for uncovered zones allowing a fast installation, while smaller sizes were applied to confined areas, providing a time saving convenient to the installation team.

Over 20 years of performance

The building company Baatz has been using Typar® geotextiles for over 20 years and recognizes its excellent performances and resistance to failure over time. With continuous feedback being received from their previous clients construction projects over the past 15 to 20 years, the Baatz company can confirm and testify for the superior performance of DuPontTM Typar® geotextiles over competitive products.

DuPontTM Typar® is the first range of geotextiles to obtain the quality certification ASQUAL for each of our products. This is a mark of quality and guarantee that is required by the Baatz company especially in projects undertaken for authorities who require these certifications.

As for the distributor of DuPontTM Typar®: Chaux de Contern, in November 2015 DuPont Luxembourg will celebrate their 40 years of successful collaboration with DuPont.