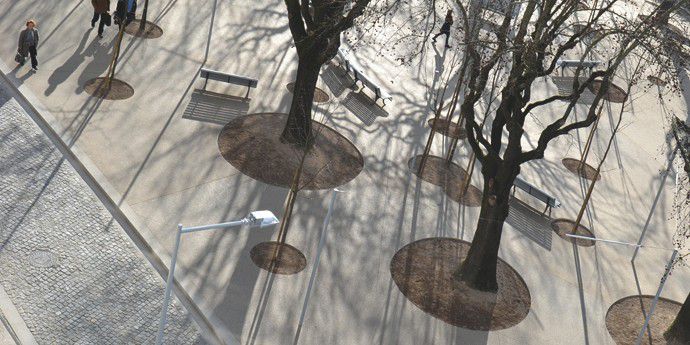 Plantex® GroundGrid® - A sustainable urban solution in an historic environment

In January 2012, the newly refurbished city plaza "Praça do Toral" was ready for the opening celebrations commemorating its home Guimarães, Portugal as the European Capital of Culture 2012. For the thorough redevelopment of the bustling city square, DuPont™ Plantex® GroundGrid® gravel stabilizer has been used for both its technical performance and for being a sustainable urban solution.

The European Capital of Culture is a city designated by the European Union for a period of one calendar year during which it organises a series of cultural events with a strong European dimension. Guimarães, also known as the birthplace of the Portuguese identity, went through special renovations to prepare its Toral plaza for the honours. As the main meeting area for its citizens and centerpiece for the admiration of thousands of visitors, the plaza was totally renovated into a beautiful and functional element of this medieval town.


Commissioned by the Guimarães Town Hall and carried out by María Manuela Oliveira for the company Alberto Couto Alves, the landscaping was entrusted to Jardins e Afins, a company with great expertise in building and maintenance of gardens and green areas. José Oliveira, the company´s Managing Director, remarks, “The problem was to avoid gravel migration, as there were uneven areas and slopes that would cause displacement and problems on the surface of this historic place.” Thus, to provide a solution to this problem and to achieve a permeable surface, DuPont™ Plantex® GroundGrid® was used to increase strength and constrain the gravel.

The high versatility and performance of DuPont™ Plantex® GroundGrid has consequently made it one of the most used materials in the renovation of Guimarães, a city that stands as an emblem of the evolution of Portuguese architecture between the XV and the XIX century, and is characterized by the systematic use of traditional building materials and techniques.